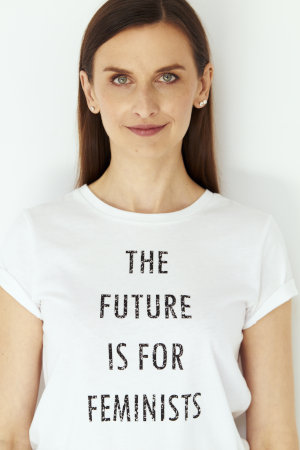 The vegan Dr. Sylwia Spurek is a member of the European Parliament since the 2019 elections and part of the Socialists & Democrats parliamentary group in the European Parliament. She’s been dealing with human rights, women’s rights in particular, for 20 years. She is a former Deputy Commissioner of Human Rights. Sylwia Spurek was born in 1976 in Poland and is a lawyer by profession. Vegan since 2015.

1. In the social network Twitter, the self-description „vegan“ is on top of your bio. Why do you follow a vegan lifestyle? Do you also transfer your vegan lifestyle into the political work?

Spurek: As a feminist and human rights defender I am against all exploitation, oppression and violence. It was only a matter of time for me to move forward and become a vegan. You can not be against violence and eat and exploit sentient beings. For me there is no feminism without veganism. Veganism is the only fair choice when we care about animal rights. If it comes to transferring vegan lifestyle into my political work, it influences and frequently even determines actions taken by me. Since the beginning of my mandate I have been advocating for animal rights and focusing on the issue of industrial animal farming, both in relation to animal rights but also climate and environmental reasons. On daily basis, I cooperate with animal-rights NGOs so to make my work as an MEP as much effective and meaningful as possible. Yes, I do not have a problem with direct declaring: I am a vegan. I wonder why other people are not…

2. What are your experiences regarding your vegan lifestyle in your parliamentary group and the Polish society?

Spurek: As S&D is the second largest political group in the EP it gathers people of various beliefs – both very progressive ones and those who are more conservative. For instance famous “veggie burger” amendment was an idea of S&D MEPs… I have some allies within the other political groups, The Greens, Renew, GUE and independent MEPs, who share my outlook on this topic. About the Polish society – many think that Polish people are very traditional and conservative, also if it comes to diet. When many times this is true, there is a large group who follows vegan or vegetarian lifestyle and is involved in fighting for animal rights. In comparison to many European cities, especially Brussels, Warsaw is a paradise for vegans! And it is mainly because there are so many people who are either vegans or want to reduce their intake of meat for ethical or climate reasons.

3. You sit on the Committee on Civil Liberties, Justice and Home Affairs and you are an substitute member of the Committee on the Environment, Public Health and Food Safety and the Committee on Agriculture and Rural Development. How does your ethical attitude influence your political work? Which policies are particularly important to you?

Spurek: I have decided to run in the EP elections with a very clear agenda and I am still following it. My priorities are: women rights, rule of law issues, animal rights and environmental protection as well as climate crisis, especially, as mentioned before, in relation to industrial animal farming. As you can see, all of those are very much ethical-related issues. Therefore, I would say that majority of my activities in the EP are strongly linked to my ethical attitude. Currently, I am focusing on the “From farm to fork” strategy. My main goal is to convince the Commission and the MEPs that the sustainable food system is not possible without drastic transformation of the meat and dairy industry. Advocating for what I believe in is the only way of working that I know. And I am planning to continue doing that, even if that frequently means facing harsh criticism or hate speech, in the internet in particular.

4. Where do you think European politics still has a lot of catching up to do in terms of food and animal welfare policy? Have progressive results in the past failed due to political will or other obstacles?

Spurek: There is no doubt that there are many issues that still need to be taken care of. Starting from the aforementioned industrial animal farming, through animal rights (fish included) and ending with consumer rights. The “From farm to fork” strategy could be a start, but it is definitely far from being enough. It fails to address properly an issue of animal industrial farming as well as meat and other animal-derived products consumption and consumer rights related to that. Additionally, no clear declarations have been made concerning banning e.g. cage farming or especially cruel slaughtering methods.

It is hard to assess what were the real reasons why progressive ideas in this field were  not successful in the past. Probably some interests groups have better sources than we do :) We have to focus on what can be done now and make sure the EU provide its citizens with ambitious, fair and effective solutions regarding climate crisis, environment protection and animal rights.

Spurek: I would not say that we have already succeeded in any of those fields. There is still a long way ahead of us to transform the European agriculture to a sustainable one and to make sure that the level of animal welfare in the EU is satisfactory. As the climate crisis is worsening and exploitation of animals is still on the rise, we need to take decisive and immediate action to address those problems. Until the EU reaches its 2050 goal of climate neutrality, making sure at the same time that the transition is being made in a just way and that we take the responsibility for other living creatures with which we share this planet, we must work tirelessly.

6. Which countries within the S&D parliamentary group put on the strongest pressure in terms of animal welfare?

Spurek: I don’t think you can indicate one or two countries which are the leaders within S&D if it comes to animal rights. It is not a matter of geography, but rather of personal beliefs of the MEPs. Also, what might be surprising for many, MEPs who are fighting for animal rights are not only members of the Greens or S&D – you can also find those who are members of more conservative groups and are still active in this field. But I do not know a lot of MEPs who are vegans. There are only a few of us in the EP. And, let me repeat this, I totally do not understand how you can fight for animals rights or say you love animals while eating a steak, scrambled eggs, drinking a coffee with cow milk. This way you take part in exploitation and killing of animals and pay somebody to exploit or kill animals.

7. Can you tell us a little bit more about your interchange with your vegan colleagues?

Spurek: Since I have been very vocal about me being vegan from the very beginning of my mandate, I have managed to find a group of MEPs on whom I can always count when it comes to animal rights and veganism. As I said there are only few vegan MEPs, that is a small part of MEPs society… For the past year, we have been working together on many issues and co-hosted a few events. In the coming months, we are planning to cooperate in relation to the “From Farm to Fork” strategy and I am sure that together we can be successful in advocating for animal rights.

8. Driven by the market economy, more and more calves are born in the dairy industry. A German dairy cow gives birth to one calf a year. Nobody in the industry wants to forego sales volume. The result is a multitude of calves with which no one knows what to do. Tons of beef are entering the European market from other markets. “And the four million dairy cows and their 3.5 million offspring are doing poorly. “Ten to eighteen percent of calves die before the 4th month. Politicians pass on the problem to the consumers, who should pay more for dairy products and meat. „The EU could also align its common agricultural policy (CAP) more closely with animal welfare. So far, it has distributed its largest budget item, around 50 billion euros a year, mainly by area.”

Spurek: As the biggest challenge of the EU right now and probably the most challenging one that it has ever taken on is tackling climate crisis, we must focus on this problem while transforming the EU agriculture. This means that we must completely change the way we breed animals as well as produce and consume animal-derived products. It is because the animal sector is responsible for 70% of GHG emissions coming from the EU agriculture. We can never call our food system sustainable without phasing out industrial animal farming. The EU needs to make sure that it encourages farmers to switch to less intensive animal husbandry, which will also allow for the level of animal welfare to be improved. And, with new CAP coming, we have a perfect opportunity to ensure that the Europeans can enjoy food which is healthy, ethical and produced in a sustainable way. But it is only the beginning. We need to start phasing out killing and exploitation of animals at all. 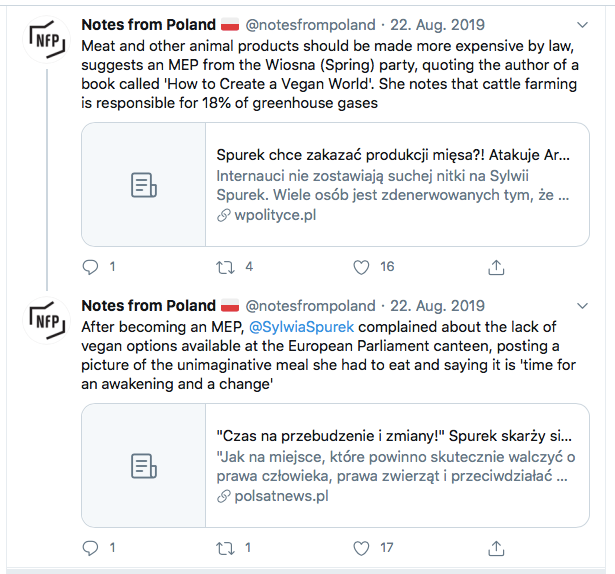 9. This tweet describes your anger about the insufficient vegan options in the European Parliament canteen. We were told that the vegetarian dish also costs a lot more than the meat dish (7.90€, respectively 4.90 €). What could be done about that?

Spurek: A few months ago I have started a conversation with the Secretary General of the EP about this issue and consumer rights related to that (also rights of people suffering from allergies), which I plan to continue as soon as the EP canteen reopens. But this time, I will do that with the support of other MEPs who share my views on this problem. With the publication of the communication on “From Farm to Fork” strategy, we have been provided with another arguments to be used in order to transform the EP canteen in a way in which it could be an example for other EU institutions and, hopefully, other entities. I believe that we should start the change from ourselves and we are perfectly capable to do so.