Who are Sozis für Tiere? 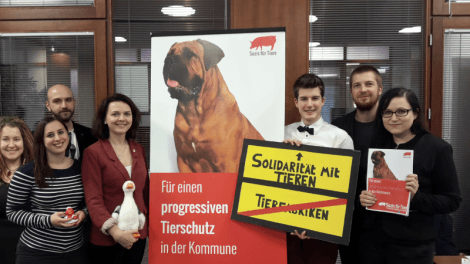 Group picture from Sozis für Tiere at the Landesparteitag 2015 from the Social Democratic Party Hesse.

The exploitation of the animals is a topic which can get lost very quickly in the discussion of a more equitable society. Further, the radical social democratic idea of animal protection has not gotten implemented but it is part of historical amnesia to pretend like this never has existed. So, we want to renew the purposes of the radical social democratic animal protection. In our opinion, the social democracy should care about the animals for their sake and their right to live in freedom rather than just caring about animals because of the advantage we as human beings would have. It is just the right thing to do.

A new consciousness for treating animals in a better way is not going to develop itself, but instead, it is needed to fight for it in the society as well as in the social democracy. The social justice is essential when claims for progressive animal protection require a political majority.

A new consciousness of the social democracy can entail changes in more than one political level widely. With our engagement, it is possible to make these changes.

How can I join Sozis für Tiere?

Send this to a friend